Momentary Monument – The Core marked the start of a wider-ranging project, Digging-Up. Atlas of the Blank Histories, which was first put into action in Kabul in 2012, on the occasion of dOCUMENTA (13).

It started with a survey of the territory, to identify the most significant places in the city. This study was based on written texts and stories handed down orally, but especially on the opinions of those who actually live there. On this occasion, a questionnaire was drawn up and distributed to the citizens of Kabul, asking them to point out the places that they felt they wanted to preserve, whether public or private. Places in the inner neighbourhoods of the city of Kabul or in its immediate surroundings that the respondents considered important from a historical, social, or cultural point of view, or even just for personal reasons.

The results of the survey identified six areas, from each of which a core sample was taken: the Ashiqan wa Arifan cemetery, one of the oldest districts in Kabul, Bagh-e Babur, a historic park in the city where Babur, the first emperor of the Mughal dynasty, is buried, the fort of Qala-e Noborja, and Darul Aman, a neoclassical-style building erected in the 1920s, sixteen kilometres from the centre of Kabul, which was in ruins at the time of the project. Then there was the Shāre Naw park, and Wazir Akbar Khan, a district to the north of the city, which takes its name from the emir who reigned in Afghanistan from 1842 to 1845, and which is now home to institutions and embassies built along European lines in the 1960s and 1970s.

Other areas were identified by the survey, by collecting documentary material and on-site inspections, though no core-drilling was carried out, so as to respect the results of the questionnaires given out during the survey. These included the headquarters of three institutions – the Afghan Center at Kabul University (ACKU), Afghan Film, and the city zoo – as well as a portion of the ancient city walls of Kabul, the One Hotel, the home of the guest house that was opened and managed by the Italian artist Alighiero Boetti in the 1970s, the ruins, after it had been razed to the ground, of the Cultural Centre built by the Soviet Union after the occupation of Afghanistan in 1979, and a series of brick kilns and a Kucis refugee camp.
The six core samples were cut into one-metre segments, placed in wooden boxes of the same length as the segments, and marked with an indication of where they were from. These were originally exhibited at the Queen’s Palace, a building at the top of the Gardens of Babur (Bagh-e-Babur), together with the hundred filled-in questionnaires, which were framed and affixed to the wall.
The display was part of an exhibition (20 June -19 July 2012) curated by the artist Aman Mojadidi and by Andrea Viliani, a member of the Core Agent Group, under the supervision of Carolyn Christov Bakargiev, the artistic director of dOCUMENTA (13), as the last stage of the dOCUMENTA (13) project in Afghanistan, which came after a series of seminars held in Kabul and Bamiyan between 2010 and 2012.

The gardens were created in about 1528 (935 in the Islamic calendar) by the Mughal emperor who gave them his name and described them in his memoirs. Formerly a place of rest and burial, they are now one of the places where the city community congregates the most. They underwent a series of enlargements and transformations, including the construction of a mosque by the Mughal emperor Shihābuddīn Moḥammed Khurram, better known as Shāh Jahān, in 1675. In 1880, Emir Abdur Rahman Khan built a new pavilion and a residence for his wife (the Queen’s Palace). A greenhouse was built in 1980 and the garden was opened to the public in 1993. The most recent work involved the restoration of the area where the tomb of Babur was located (it has been lost) and of the perimeter walls, rehabilitating the existing buildings, and the construction of a new caravanserai. Trees and shrubs have been planted and, based on archaeological excavations, the thirteen terraces have been restored. These are connected to each other by a network of walkways and stairways, along which visitors can walk.

When the exhibition at the Queen’s Palace in Bagh-e Babur came to an end, the cores were dispersed and the filled-in questionnaires were donated to the University of Kabul, remaining as the only evidence of the installation.

Like the other installations that came later in the Digging-Up project, of which the one in Kabul was the starting point and the methodological premise, the work tells of an identity sedimented in the ground. As such, it constitutes an archive that documents a personal and collective history and memory, in this case endangered by events that in recent decades have been marked by foreign invasions, civil wars, the rise of totalitarian regimes, peace-making processes imposed from the outside, intense exploitation, and rapid construction and urban planning upheavals: each core sample corresponds to a place identified by precise geolocation coordinates, which also preserves different epochs, as recorded in the strata of subsoil. Unlike later works in the project, the one in Kabul did not include identification plaques to mark the sites where the coring took place, nor were the “time capsules” preserved to safeguard and convey the cores to the future. The cores and questionnaires were instead entrusted in 2012 to the keeping of the Aga Khan Trust for Culture (AKTC), a partner of dOCUMENTA (13), for conservation and study purposes, in collaboration with the University of Kabul.

The conservation of the cores was then entrusted to an individual living in Afghanistan, with the understanding that they would be the momentary custodian of the work. When this individual is no longer able to keep the cores, for whatever reason, their only task will be to identify a future keeper into whose custody the cores will be transferred, and so on, until such time that the cores are either irrevocably lost or eventually returned to the soil from which they were extracted…. or perhaps found again and preserved for posterity. The destiny of the project in Afghanistan will thus be intertwined with the future of the place and its people. 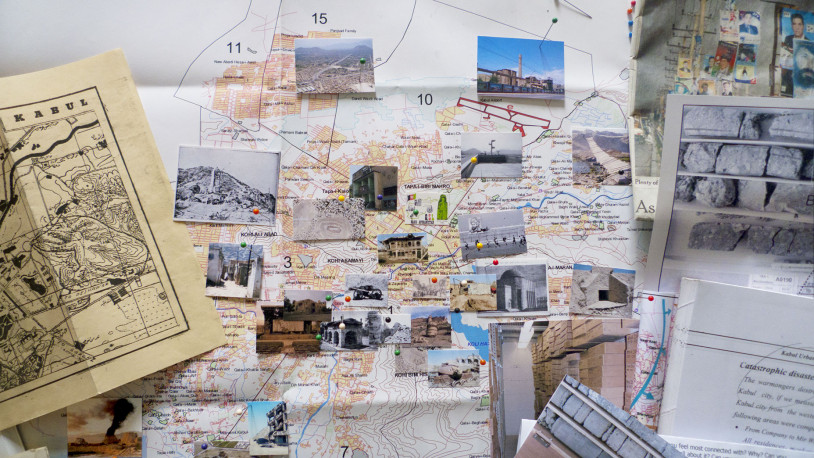